‘Say no to child marriage’: Bangladeshi women fight for equality – in pictures

Bangladesh to remove the word ‘virgin’ from Muslim marriage certificates

Overall the number of forced marriage cases rose by 47% in 2018 compared to the year before - while there were 297 male victims.

The number of forced marriage cases dealt with by a specialist British unit tackling the issue leapt to a record high last year.

The new figures released by the Forced Marriage Unit reveal they dealt with 1,764 cases in 2018, a jump of 47% from the year before.

Forced marriages are commonly associated with vulnerable young women suffering at the hands of domineering male relatives, but the statistics show it is a significant problem in Britain for young males too.

These new figures also showed a rise in the number of male victims to total of 297, the highest number reported in seven years.

And while most cases in 2018 involved a UK citizen being taken to a foreign country or marrying a foreign national, 7% of the latest cases were entirely domestic based.

Sky News spoke to several young men who have either been forced into marriage, or have witnessed it first-hand.

Imran told Sky News that he received death threats from his family when he didn't want to marry his first cousin, but at the age of 17 he was forced into it by his parents who blackmailed and pressured him.

He said: "My mum said we're going to take you to Pakistan for a holiday…and I went innocently thinking it was a holiday. Two weeks later they basically said to me we're going to set you a date…your wedding date.

"I cried my eyes out. I said mum why you doing this to me, I'm begging you don't do this to me. And they said well if you don't do it, your grandmother's hidden your passports and you won't be going back to the UK." 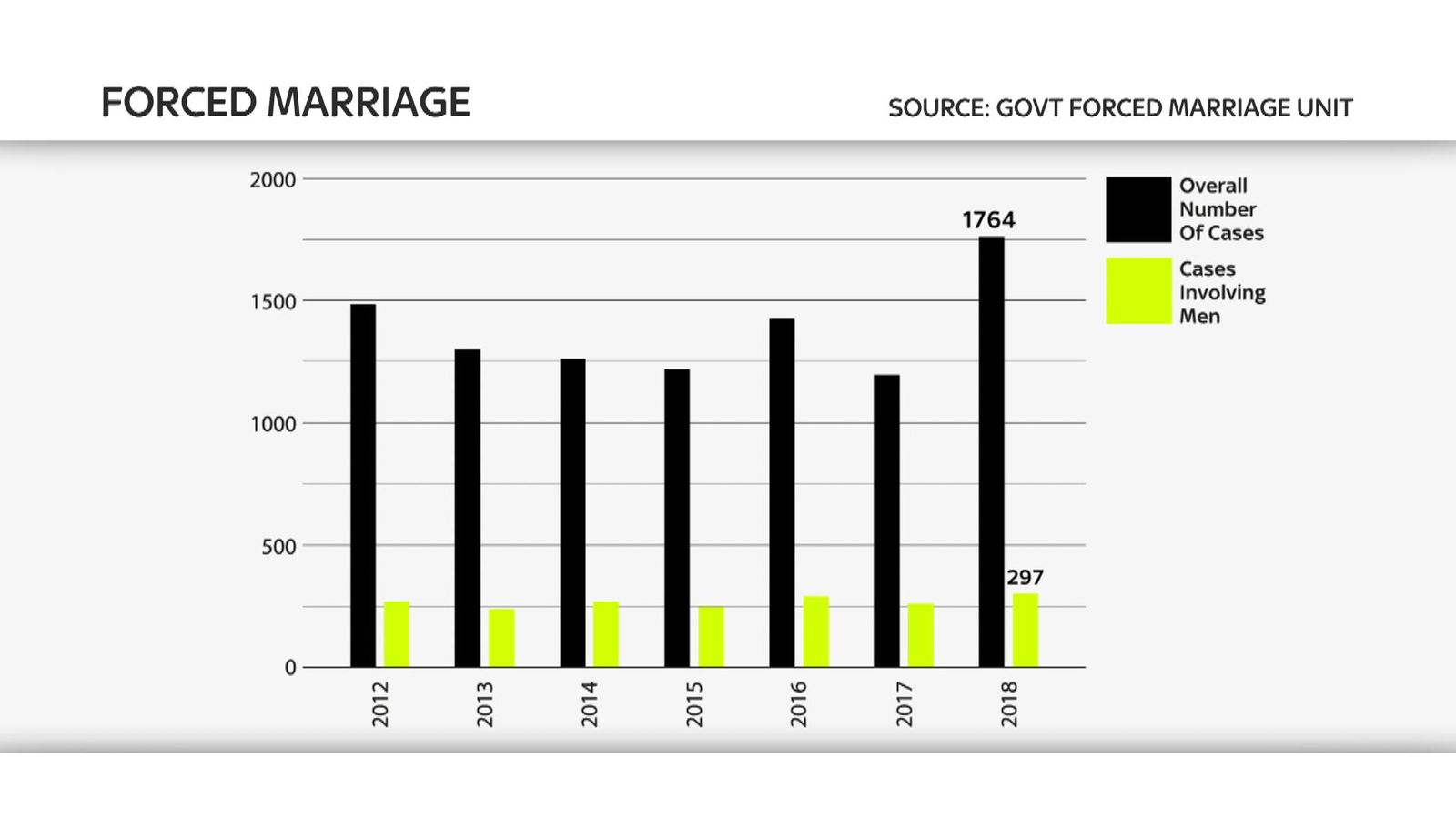 "I was absolutely devastated. From being in an innocent idyllic life to having that thrown on you was the biggest shock of my life. I literally broke down."

Imran is now divorced after years away from his family and the woman he was forced to marry, but he has been left with the emotional scars of his past.

He said: "I'd probably be a doctor, I'd be in the medical profession because I was predicted straight As and had a place at Manchester University to do dentistry, medicine, and I was never able to fulfil my potential."

"When I came back in between the first and second year of my A-levels, I was an emotional wreck. I just went off the rails, I just wanted to escape it. From predicted straight As, I went on to fail my A-levels twice, and then I just did the first university course I could to get away from that situation."

While the majority of forced marriage cases in the UK come from a South Asian background, the new statistics show an increase of people from a Romanian background reporting the crime.

The country with the highest number of cases of forced marriage was Pakistan with 769, or 44% of the total, followed by Bangladesh with 157 cases.

There are many reasons behind why it happens - there's a protection of perceived cultural and religious beliefs that parents hold, and in many cases a child will be promised to someone from a young age. Breaking that promise between families is seen as a 'dishonourable' act.

Azam, 27, ran away from home after he witnessed his older brother beaten up, abused, and forced to marry a woman he didn't want to wed.

He told Sky News: "When he said no, my dad went mental - he went crazy, he said that's my friend's daughter.

"You need to marry her. You're going to cause shame on the family.

"There was punching and kicks everywhere - you could hear the shouting every night, he was just never happy, but he had to do what he had to do."

Discussing his reasons for running away, Azam added: "I didn't want it to happen, I just knew in the back of my mind something like this would happen one day. But it would have been a no from me. I don't care how many kicks or punches I got I would still say no. But I wouldn't know if it turned into anything more violent."

Forced marriages have only been criminalised since 2014, and while men are now beginning to find their voices, campaigners insist the real proportion of male cases are much higher.

Natasha Rattu, the executive director of charity Karma Nirvana, said she hears from victims of honour-based abuse and forced marriages almost every day.

In a statement, the minister for Crime, Safeguarding and Vulnerability, Victoria Atkins, said forced marriages were an "abhorrent crime", and could "mark the start of years of abuse".

She said: "In 2018, the Forced Marriage Unit provided support to more victims than ever before. We will continue to raise awareness of forced marriage so that all those affected by it know where they can go for support."